You are here: Home / Archives for Michael Arndt

END_OF_DOCUMENT_TOKEN_TO_BE_REPLACED

This morning was quite the media circus, as the Academy Award nominations were announced. Toy Story 3 was nominated for five awards, while Day & Night bagged one nomination. EW has compiled several statements that have been released by Lee Unkrich, Michael Arndt, and Teddy Newton, in which they thank the Academy and others. Read on to view their full statements. END_OF_DOCUMENT_TOKEN_TO_BE_REPLACED

EW is reporting that after the primary shooting was completed for the upcoming Tron: Legacy, Disney decided to show an early cut of the film to John Lasseter and Ed Catmull, who were instrumental in the emergence of Pixar. Then, Toy Story 3 screenwriter Michael Arndt and Pixar director Brad Bird were brought in to help write the re-shoots that were set to occur for the film. END_OF_DOCUMENT_TOKEN_TO_BE_REPLACED 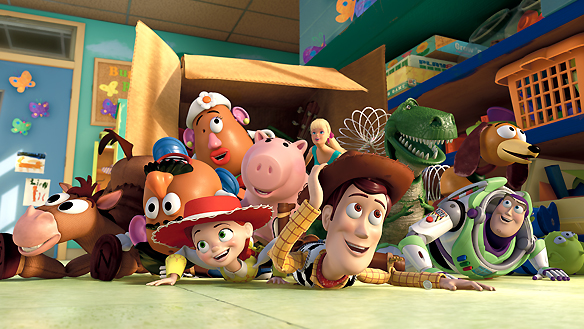 A few years ago when Disney and Pixar were in contract talks to extend their partnership, Disney decided to come up with their own idea for Toy Story 3. The storyline involved Buzz Lightyear getting shipped off to Taiwan and the other toys trying to rescue him. After Disney bought Pixar and made John Lasseter the CCO, Lasseter famously went and scrapped all development. Pixar took over and started from scratch. And oh boy, we should be thankful because the Toy Story 3 that was directed by Lee Unkrich and released on June 18th, 2010 is nothing short of magnificent. END_OF_DOCUMENT_TOKEN_TO_BE_REPLACED