You are here: Home / Archives for Cars 2 Clip

Disney/Pixar has been releasing clips from Cars 2 left and right recently. A little over a week ago, we shared a clip of Mater strolling through Tokyo International Airport and meeting new character Finn McMissile for the first time. It was the first time we saw Finn’s ability to alter his appearance, which can be a huge asset as a spy. Now, we have the continuation of that clip, where Finn shows off a few more of his abilities, and proceeds to become a more awesome character than we thought he could be. Check out the 1:20 clip, “Carmac,” in HD here! END_OF_DOCUMENT_TOKEN_TO_BE_REPLACED 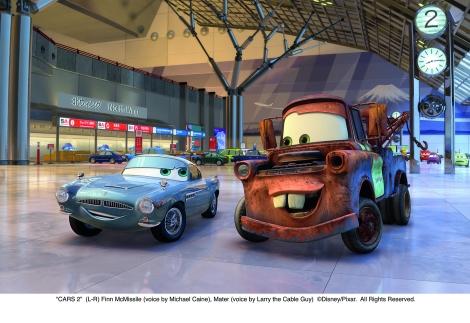 Another Cars 2 clip from the characters’ time in Japan was released today by Disney/Pixar. It features a moment we have seen in almost every trailer for the film – the moment that Mater meets spy extraordinaire Finn McMissile. However, now you have the chance to see the context of the scene, where Finn (in his disguise) mysteriously escorts Mater from the main section of the airport. We also get a peek at yet another gadget in Finn’s arsenal – a spy camera. Check out the full 30-second clip here! END_OF_DOCUMENT_TOKEN_TO_BE_REPLACED