You are here: Home / Archives for The Pixar Times / Up 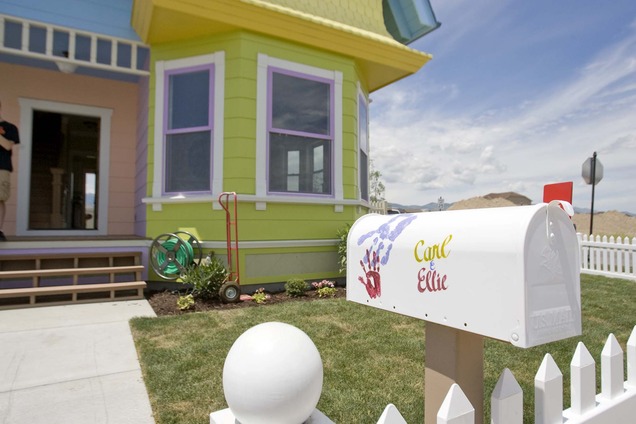 The media has been abuzz about the replica of the Up house that Bangerter Homes has built in Utah. The property recently threw open its doors to the public for tours and it has unsurprisingly been a popular spot for visitors. Reader Austin Allen had a chance to visit the unique house and sent over a great video showing off the place’s unique aspects. The first half of his video provides us with an even closer look at the intricacies of Carl and Ellie Fredricksen’s colorful home, while the second half gets a bit more creative. Take a look at the full video here! END_OF_DOCUMENT_TOKEN_TO_BE_REPLACED 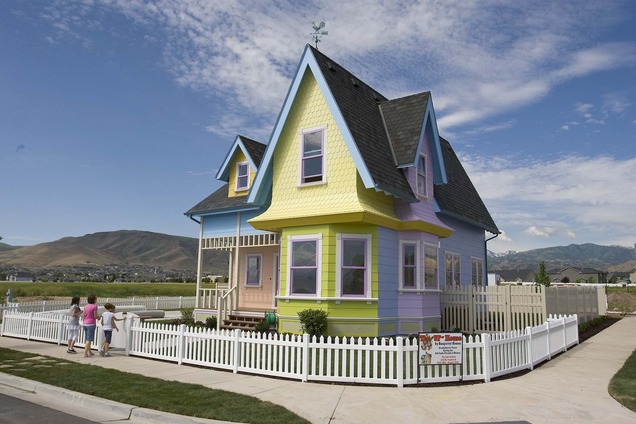 Herriman, Utah has been in the spotlight the past month, as Bangerter Homes recently built a great replica of the house from Up in the city. People have descended upon Utah from all over the country to lay eyes upon the home. What places this piece of architecture above all those that have been built previously is the fact that the inside of the home looks just like what we saw in the film as well. Down to the smallest details, such as the handrail and the objects upon the fireplace, this is likely the closest recreation of the Up house we will ever see in the real world. The Salt Lake Tribune, which ignited this story when it first covered it last month, now has a video tour through the inside of the amazing house. Take a peek here! END_OF_DOCUMENT_TOKEN_TO_BE_REPLACED 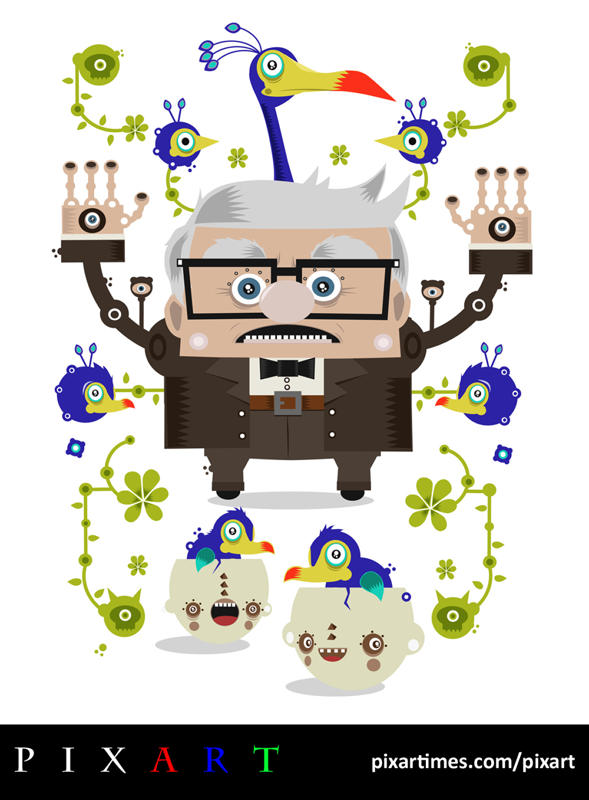 Here’s something a little different from our friend Mercedes Crespo (aka Yema Yema)! Her distinct style is in top form here as she celebrates Carl and Kevin from Up! Make sure to check out her amazing illustrations and t-shirt designs on her website. Read on for more about this artist in her own words. END_OF_DOCUMENT_TOKEN_TO_BE_REPLACED 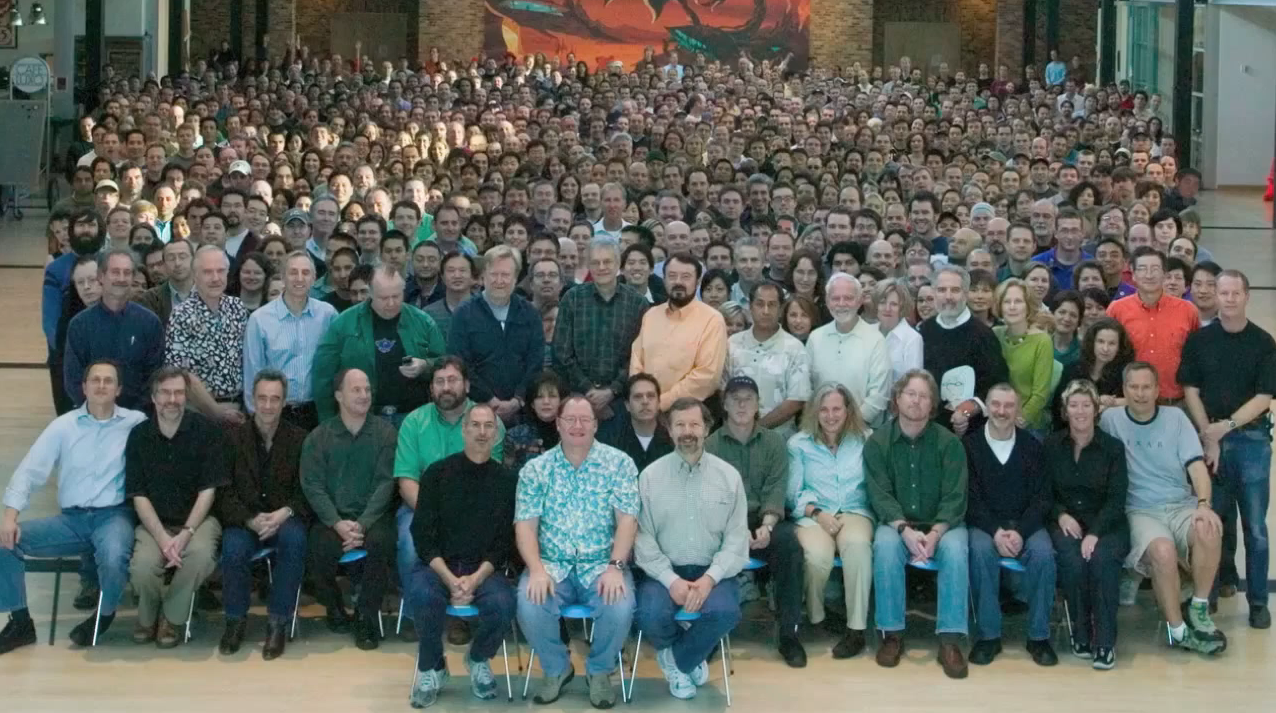 To be able to accurately describe the Pixar movie-making process in a short presentation sounds like a difficult concept but presenters Michael B. Johnson, Ricky Nierva, and Scott Clark did just that at the EG Conference back in April. Sure, presenting every aspect of making a Pixar film would take an incredibly long time, but the three do a fantastic job at providing the audience with snippets of the production process of Up. Read on to watch the fascinating 20-minute presentation here!

UPDATE: The video has been set to private, so it is no longer viewable.

END_OF_DOCUMENT_TOKEN_TO_BE_REPLACED

Up has left quite a large stamp on popular culture. The beautifully emotional film has one of the quickest ‘happiness to sadness’ transitions in cinema history, driven by the touching relationship of Carl and Ellie. The house, which played such a major role in the animated film, has seen replicas built across the world, demonstrating the love people have of that colorful home. Just a few days ago, news hit from The Salt Lake Tribune that Bangerter Homes (based in Utah) is currently building what you can say is arguably the best recreation of the couple’s house. Read on for some images from the painstaking recreation!

(UPDATE: Added video of the house below) END_OF_DOCUMENT_TOKEN_TO_BE_REPLACED 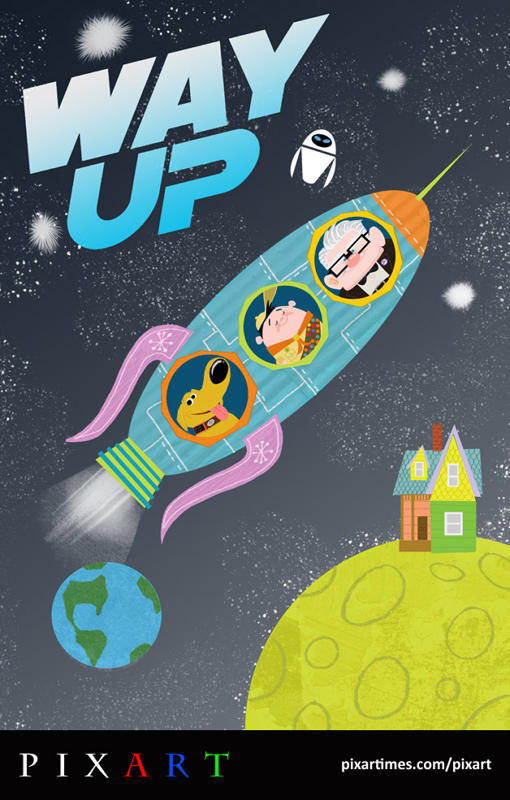 We hope you’re just as inspired as we are by the works of Wisconsin artist Brad Renner.  Check out his cool imagining of the sequel to Up. We think it’s out of this world! Brad’s work is tons of fun and overflowing with retro-modern goodness.  Check out his site and you’ll see what we mean. We appreciate Brad taking the time to contribute this great piece. Keep reading to learn more about Renner in his own words. END_OF_DOCUMENT_TOKEN_TO_BE_REPLACED 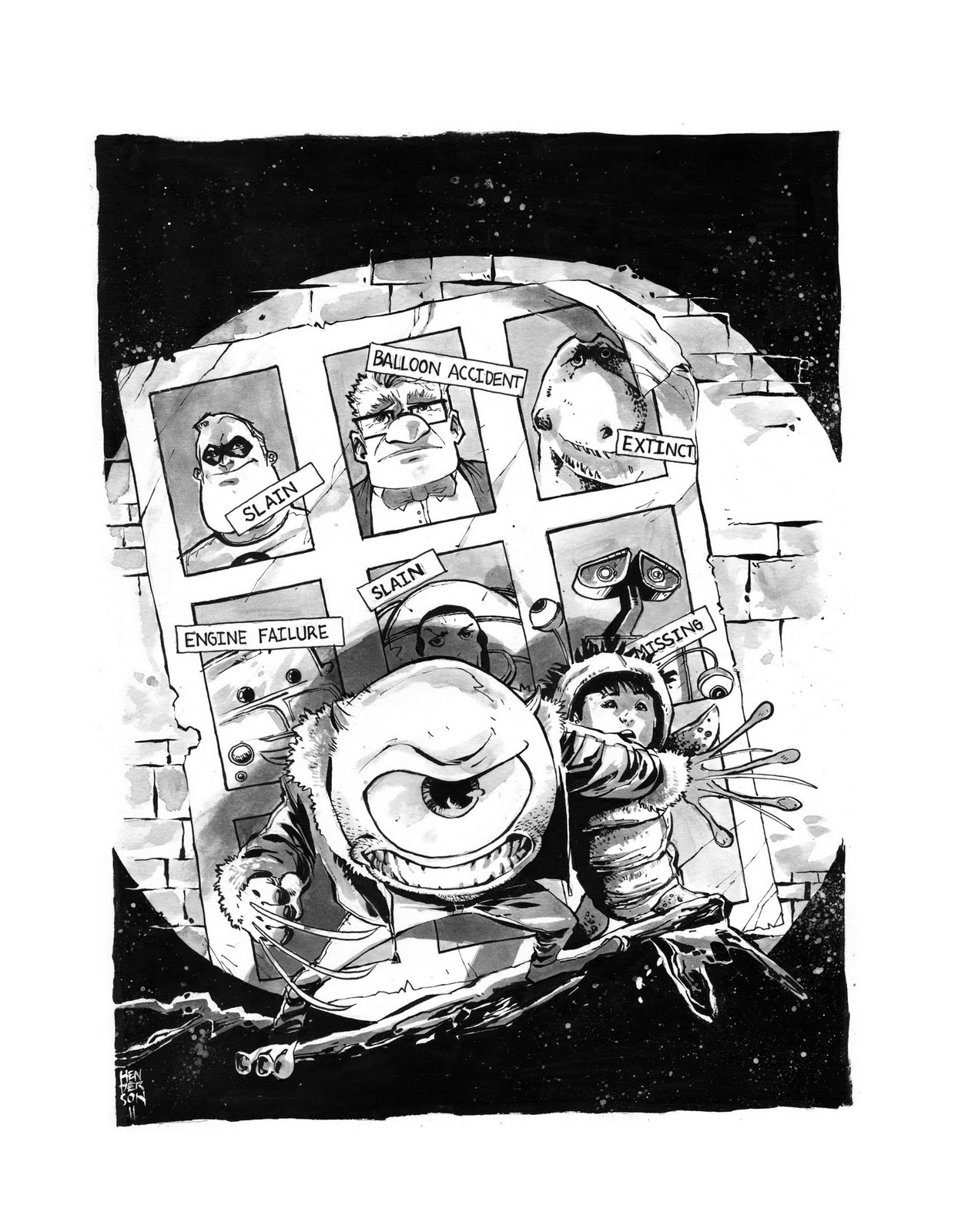 Mash-ups are fairly simple to create. One simply needs to take characters from one property and insert them into another. However, making them creative is another thing entirely. Artist Mike Henderson, a freelance illustrator for Marvel, took a handful of Pixar characters and threw them into the iconic X-Men Days of Future Past cover. Read on and take a look at the fantastic (and hilarious) artwork. END_OF_DOCUMENT_TOKEN_TO_BE_REPLACED The house in Up was a major part of the storyline in the film, as it had a great effect on the life of main character Carl Fredricksen. It also clearly had quite a lasting effect on those who watched the film, as many creative models of the house have been built since the film arrived in theaters. That tradition continues today, as the Washington Post named a replica of the Up house the winner in their fourth annual Peeps Diorama Contest. END_OF_DOCUMENT_TOKEN_TO_BE_REPLACED

We are thrilled with this outrageously original piece from Malaysian artist tanglong. Based on his favorite Pixar movie, the artist says this is the “Down” version of Up. You can check out more of his great work at his deviantART page. He’s got some great takes on classic characters and personalities. Lots of fun designs that are worth a look. We hope to see more from this fun artist. Read on for more about him in his own words below. END_OF_DOCUMENT_TOKEN_TO_BE_REPLACED 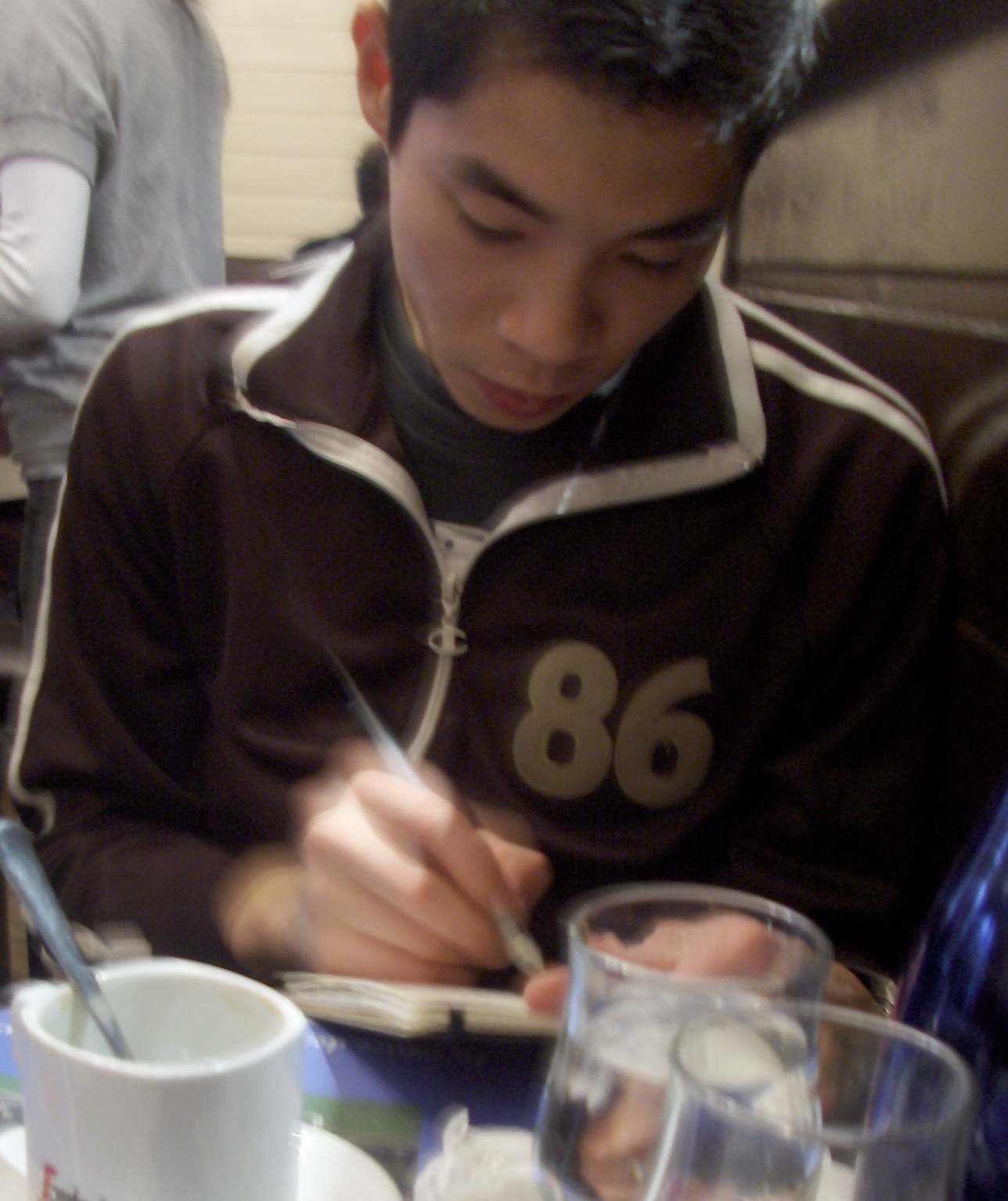 As today is the 25th Anniversary of Pixar Animation Studios, we wanted to run a special edition of PixArt to celebrate. Now, we are absolutely thrilled to present a piece by Chris Chua, an animator at Pixar. Since he joined the storied studio a few years ago, Chris has worked on films WALL-E and Up. Last week, we got a look at a turntable video for Cars 2 character, Carla Veloso, which Chris animated.

We asked Chris a few questions about his evolution into an animator, his time at Pixar, and his influences. Read on to go on a journey through the mind of a great Pixar animator! END_OF_DOCUMENT_TOKEN_TO_BE_REPLACED